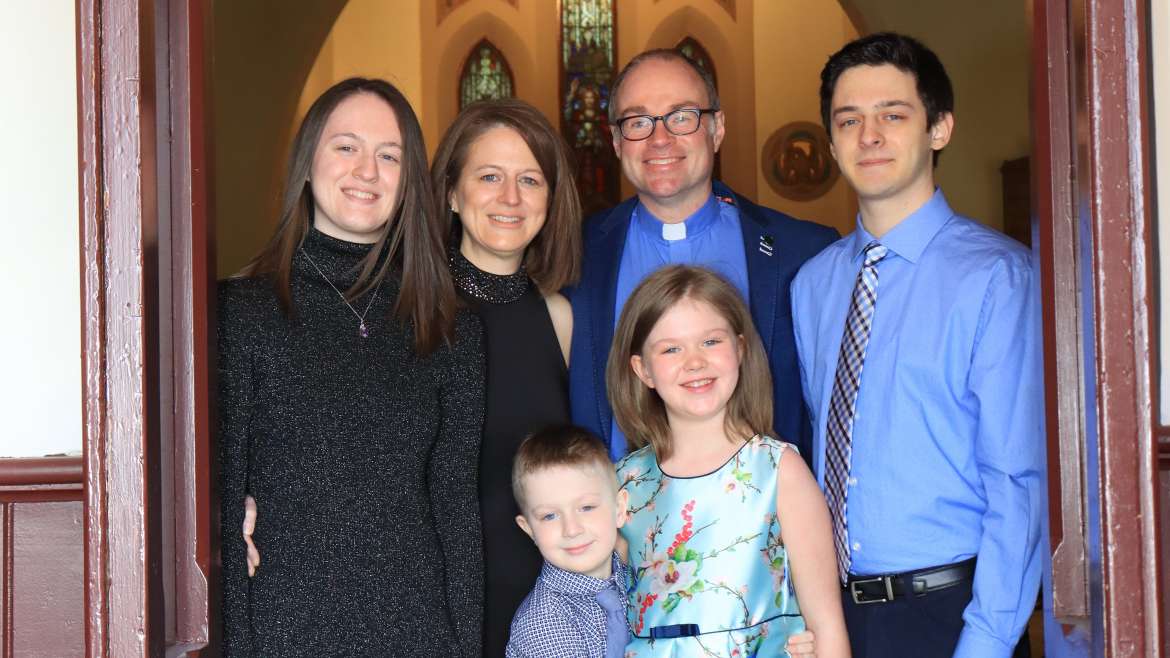 We would like to congratulate Pam and Fr. Matt for the wonderful article on their family in the April 2022 issue of the Mill Pond Magazine.  This small local Richmond Hill publication is circulated in the neighbourhood around St. Mary’s and the Mill Pond, with each issue highlighting a family in the neighbourhood and including ads and other small articles.  We have included some of the pictures from this magazine and the article itself below. 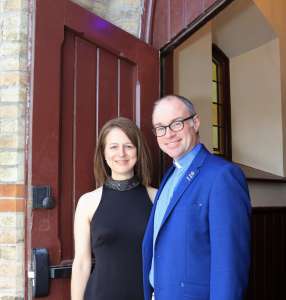 The Reverend Matthew McMillan & Family: A Calling and a Place to Call Home
By Heather Rosen Photos by Merk Photography Additional photo courtesy of the McMillan Family

The Reverend Matthew McMillan and his wife Pam are raising two boys, Riley, 22, and Dougal, 6, and daughters Keely, 20, and Molly, 8.

Father Matthew, a Peterborough native, is Head Parish Priest at St. Mary’s Anglican Church in Richmond Hill. This year, St. Mary’s is celebrating its 150th anniversary. John Arnold, one of the original settlers in the area and a United Empire Loyalist, donated a parcel of land for the construction of a local parish church. (Loyalists were people who chose to remain loyal to the Crown after the American Revolution and settled in what is now Canada.) Many families soon settled in the area.

The couple met when they worked together in Innisfil at his previous parish where she was part-time Youth Director. They began dating when Pam returned to school to earn a teaching degree, and became engaged on Christmas Eve of 2011. They were married in Cookstown by their Bishop, The Rt. Reverend George Elliott, the following July, and chose the idyllic backdrop of a friend’s farm for wedding pictures, surrounded by fields with old barns, silos and two polished combines in the background.

A native of Innisfil who attended high school in Barrie, Pam now teaches high school math and science classes in Bradford for the Simcoe District School Board. She earned a BSc at Western University, after which she studied teaching at D’Youville College in Buffalo.

Today, the couple leads busy lives, watching their children grow and keeping themselves occupied with their respective professions.

“Our happiest moments,” says The Rev. McMillan, “are are when we have times of quiet and see the family all enjoying each other’s company and relishing the simple pleasures of life or a home cooked meal.”

He says he followed a career path with several twists and turns before becoming a faith leader. “Growing up, I was encouraged to think about ministry, but I had other impressions about what I should do or where I should be, as many do.”

He even considered entering politics, as his great-grandfather had been a Member of Parliament; for a time he felt that perhaps he should follow suit, “dispensing wisdom and making important decisions.”

To that end, he pursued an undergraduate degree in Political Science at Huron College (Western University), and worked for the provincial government. After a year, however, he went on medical leave. Then he chose to study Agricultural Business at the University of Guelph, inspired by his passion for nature and farming. Although he enjoyed his studies, he ultimately felt a deeper calling.

Father Matthew says, “Having through my own journey experienced a great transformation which guided me from seeking power and authority, to places of nurturing life and experiencing the giftedness of being open to each moment, I knew inside that I had a calling for a religious vocation, that would allow me to serve my community through counselling, prayer and communal labours for holy causes.”

His faith became his anchor in life, leading him to Trinity College at the University of Toronto to pursue a Master’s of Divinity, and ultimately to seek ordination as an Anglican Priest. Since 2007, he has served parishes in Agincourt, Innisfil, Stony Lake and finally Richmond Hill, where he has put down roots in Mill Pond, a place he is proud to call home.

The Reverend is not only involved with prayer and worship for his community, but also refugee work. St. Mary’s welcomed a family of six from Afghanistan in October of 2021, and eagerly anticipates the arrival of another family this summer. His Outreach Ministry has organized a curbside food bank on Yonge Street called the Blessings Box, which helps to support many food-insecure and homeless individuals. He also sits on the board of the Richmond Hill Ecumenical Housing Corporation, a local not-for-profit housing corporation that is preparing to break ground on an affordable housing project with over 90 units, located next to the Richmond Hill GO Station, sometime this year.

He muses, “It is wonderful to be part of these activities that help to give back and help support Richmond Hill.”

In their spare time, the couple enjoys curling – and can be very competitive. The kids love tennis, which The Reverend also plays, although he prefers squash. Pam is a natural athlete – and always scores more baskets when the couple plays basketball in the driveway!

The children’s activities keep the family busy. They regularly take advantage of skating and hockey across Richmond Hill and York Region. The whole family enjoys skating on the Mill Pond when it is covered in ice.

Riley and Keely both attended Alexander Mackenzie HS before going off to university. Riley will graduate this year in Math and Computer Science from Brock University in St. Catharines, while Keely is in her second year of English studies at Queen’s University in Kingston. The two younger children are at O.M. MacKillop P.S. Molly enjoys math, but loves art and wants to be an artist, while Dougal is fascinated by animals, dinosaurs, and science.

“If we can’t find him,” laughs Father Matthew, “he’s downstairs reading a dinosaur book or building something with Lego.”

The children share some common interests, but also have a few of their own. Riley and Keely both played rep hockey and enjoy skating, and have encouraged their younger siblings to skate; Molly and Dougal take advantage of a few neighbours’ backyard rinks, every chance they get. Molly is keeping up with her older siblings in music, and takes piano lessons through the Yamaha program, while Dougal participates in the Beavers scout troop at Richmond Hill United Church.

The kids also love taking long bike rides throughout the Mill Pond Neighbourhood. The park in front of Elgin Barrow is beloved by the younger children for the unique spring-mounted rides.

The McMillan clan is quite fond of their home at the south end of Mill Pond where they have lived since 2017, when he took on the role as Head Parish Priest at St. Mary’s. To them it seems that many people who settle there, choose to stay for many, many years.

“It’s got the feeling of a village, in the midst of a bustling municipality,” he says. “We are blessed to have the luxury of space and neighbours who look out for our kids and help out if you need an extra shovel during a heavy storm. Our kids love the community because of all the parks and recreation spaces nearby. Folks are busy, but never too busy to stop or wave, or just drop off a few cookies for the kids.”

The Reverend says his family enjoys travelling and exploring, having visited Egypt, Israel, Ireland, Scotland, Wales, England and the Caribbean. He was planning a pilgrimage to the Holy Land for his parish, and had recently held a travel information night when the pandemic hit in early 2020; he looks forward to rescheduling the trip.

While he enjoys the support of family in his work responsibilities, he says it is hard to find time for long week-end trips, or longer vacations during Christmas or Easter holidays. Fortunately, getting away is easier for them during the summer. For the past four years, they have been able to escape to Stony Lake to enjoy fishing, swimming, s’mores and too much Kawartha Dairy Ice Cream!

Father Matthew says that Mill Pond has offered his family a great life over the past five years, in many ways.

“It is a lot of moving parts that make up a community, and like a family, it is all about giving and receiving and walking together.” 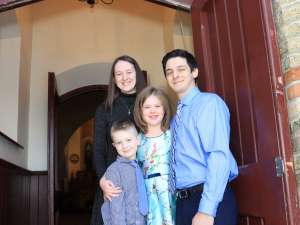 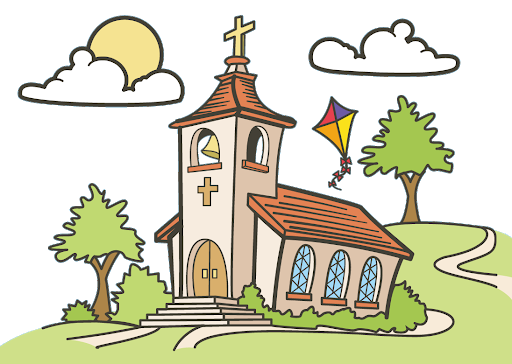 All Anglican Churches Are To Remain Closed – Gardens Open 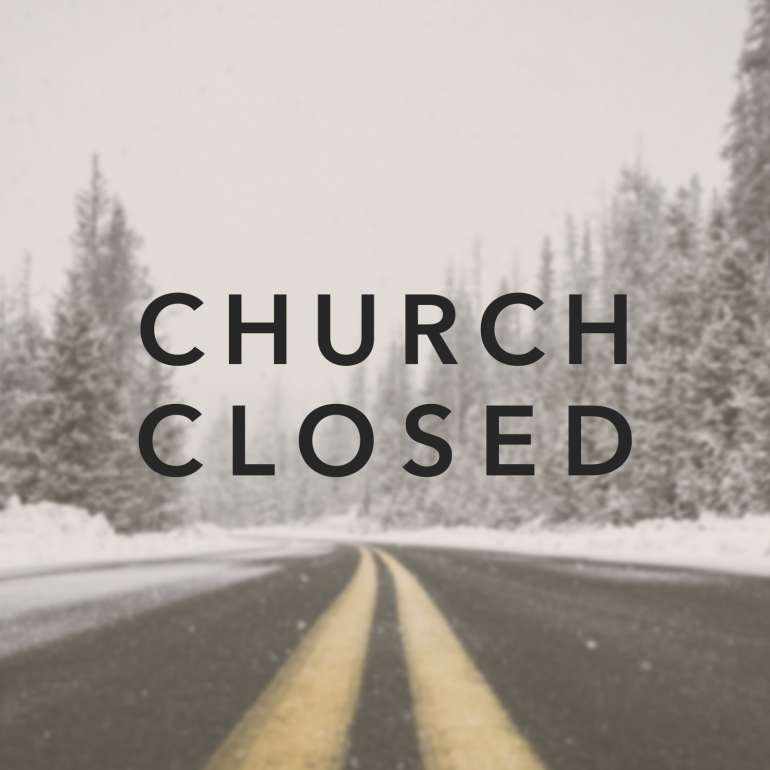 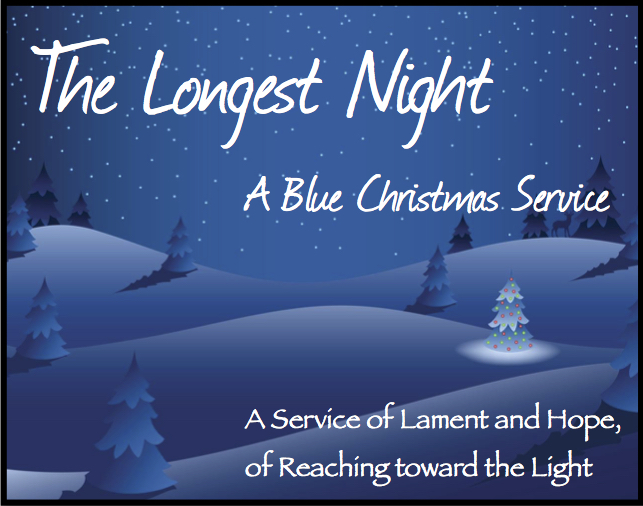 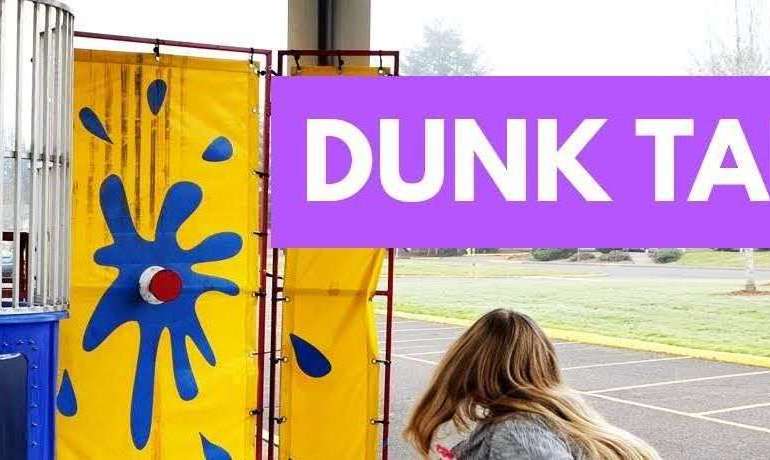